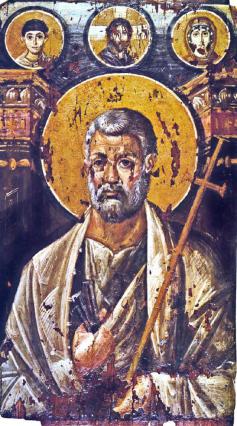 Peter, who was also known as Simon Peter of Cephas, had humble beginnings and became one of the Twelve Apostles of Jesus. Peter was a native of Bethsaida, near Lake Tiberias and was the son of Jonah. He and his brother Andrew were fishermen on Lake Genesareth. The Bible chronicles when the brothers met Jesus in Mark chapter 1, which reads: As Jesus passed along the Sea of Galilee, he saw Simon and his brother Andrew casting a net into the sea—for they were fishermen. 17 And Jesus said to them, “Follow me and I will make you fish for people.” 18 And immediately they left their nets and followed him.

Just like that, Peter followed Jesus and his life was changed forever. Though he was one of the first disciples called to follow Jesus and eventually became the spokesman for the group, Peter is known for his "little faith."

Another famous story is Peter's attempt to save Jesus from the soldiers who came to take Him to his doom. As described in John 18:10-12, "Simon Peter, who had a sword, drew it and struck the high priest's servant, cutting off his right ear. The servant's name was Malchus. Jesus said to Peter, 'Put your sword back in its scabbard; am I not to drink the cup that the Father has given me?' The cohort and its tribune and the Jewish guards seized Jesus and bound him."

Following the failed attempt to save Jesus, Peter was recorded denying Jesus, which The Saviour foretold during the Last Supper in Mark chapter 14: "Peter said, 'Even if all fall away, I will not.' And Jesus said to him, 'In truth I tell you, this day, this very night, before the cock crows twice, you will have disowned me three times.' But he repeated still more earnestly, 'If I have to die with you, I will never disown you.' And they all said the same."

Regardless of his claims, Peter did deny Christ three times. Following his resurrection, Christ came before his disciples several times. John:21:12-23 describes an instance when Peter is given three chances to admit his love for Jesus, and each time he says he does.

"Jesus said to them, 'Come and have breakfast.' None of the disciples was bold enough to ask, 'Who are you?' They knew quite well it was the Lord. Jesus then stepped forward, took the bread and gave it to them, and the same with the fish.

"This was the third time that Jesus revealed himself to the disciples after rising from the dead. When they had eaten, Jesus said to Simon Peter, 'Simon son of John, do you love me more than these others do?' He answered, 'Yes, Lord, you know I love you.' Jesus said to him, 'Feed my lambs.'

"In all truth I tell you, when you were young you put on your own belt and walked where you liked; but when you grow old you will stretch out your hands, and somebody else will put a belt round you and take you where you would rather not go. "In these words he indicated the kind of death by which Peter would give glory to God. After this he said, 'Follow me.' St Peter is a poignant reminder to all of us that even when we fail Jesus, his love is greater!

Our March Magazine
Aspiration is the magazine produced each month for our group of parishes
Aspiration March 2020 compressed final.p[...]
Adobe Acrobat document [5.1 MB]