We are still livestreaming our Sunday service on our Facebook page for those who are unable to attend. https://www.facebook.com/pages/St-Martins-Church-Ross-Rd-Hereford/135651226488692 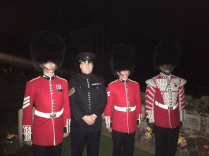 It was a privilege to welcome the Welsh Guards RST North to St Martin's on a recent Monday evening as part of a journey to raise awareness for Welsh Guards that have made the ultimate sacrifice as a result of operations since the Second World War. Follow their journey on Facebook at 'Road to Remembrance' 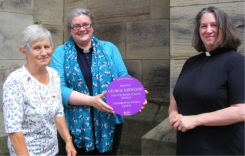 The Violet Plaques Project has seen eleven temporary plaques installed across the city in key locations to commemorate moments within the suffragette movement. The idea for the violet plaques arose during the research phase of the Eastern Cloisters Project, a Heritage Lottery Funded project based within the cloisters of Hereford Cathedral. In St Martin’s we have a plaque to commemorate Reverend George Kirwood. Born in London in 1819, George Henry Kirwood attended St Bees Theological College, Cumbria, which was for the training of non-graduate clergymen. He became Vicar of St Martin’s Church in Hereford in 1857 retiring in 1893. He sought to improve local conditions for the community, providing education through the foundation of St Martin’s School in 1859. Reverend Kirwood was elected President of the Hereford YMCA in 1866, a post he held until he retired. He campaigned for women’s equality and wrote extensively on the need for universal suffrage. In May 1878 he addressed a public meeting at Shire Hall organised by the National Society for Women’s Suffrage. Follow the stories by using #VioletPlaques.

As you can imagine, I'm sure, this has been a very difficult time for our Church community and one of the challenges we face is the loss of earnings as donations, fees and hall rental income have fallen considerably. If you are able to support the work of our Churches and make a donation we would be very grateful.

Donations can be made online using the button below, or through the team office. Thank you for your help.

This week's newsletter for South Wye, Hereford.
If you would like to receive this newsletter by email each week, please email the office (office@stmartinshereford.org.uk).
Newsletter 8th May.pdf
Adobe Acrobat document [726.4 KB]

Our April Magazine
Aspiration is the magazine produced each month for our group of parishes. A weekly newsletter (above) is also being distributed during the current restrictions
Aspiration April 2022.pdf
Adobe Acrobat document [4.6 MB]